Pyramid opens the 29th edition of the Street Parade

Pyramid is a global movement, although its conception and main home is Ibiza, its concept travels around the world visiting the best stages. One of its next stops will be in Zurich opening the 29th edition of the Street Parade on Saturday 13th August 2022. During the parade weekend, from Friday evening until Monday morning, some 80 parties, both large and small, will take place in and around Zurich.

Year after year, the world's most colourful house and techno parade fascinates hundreds of thousands of dance fans from all continents. Around 30 Love Mobiles, brightly decorated trucks filled with gigantic music equipment, DJs and clubbers, drive at a snail's pace through the crowds around Lake Zurich. In addition to these "moving platforms", eight stages along the route complete the selection of contemporary electronic music with top DJs, live acts and multimedia.

The Street Parade remains a demonstration of love, peace, freedom, generosity and tolerance. The world and the music have changed considerably since the first Street Parade in 1992. The conditions for the organisers have been transformed: the wide range of services, such as waste disposal, paramedical services and security, and consequently the costs have increased in line with the number of visitors. As was already the case at the beginning of the new millennium, the Street Parade continues to be a leader in the field of event security in Europe. Despite the tough demands it faces, the non-profit Street Parade Association has managed to retain the basic concept - the "soul" - of the event and of the old techno movement. It is probably partly due to this that international star DJs continue to appear at the Street Parade free of charge.

Pyramid will have its own fantasy truck where members of our family such as CAAL, Mar-T, Jackmaster and Marco Faraone will be playing. This time we will be joined by superstar duo Solardo, two friends from Manchester who continue to pay homage to the rich heritage of the House sound. 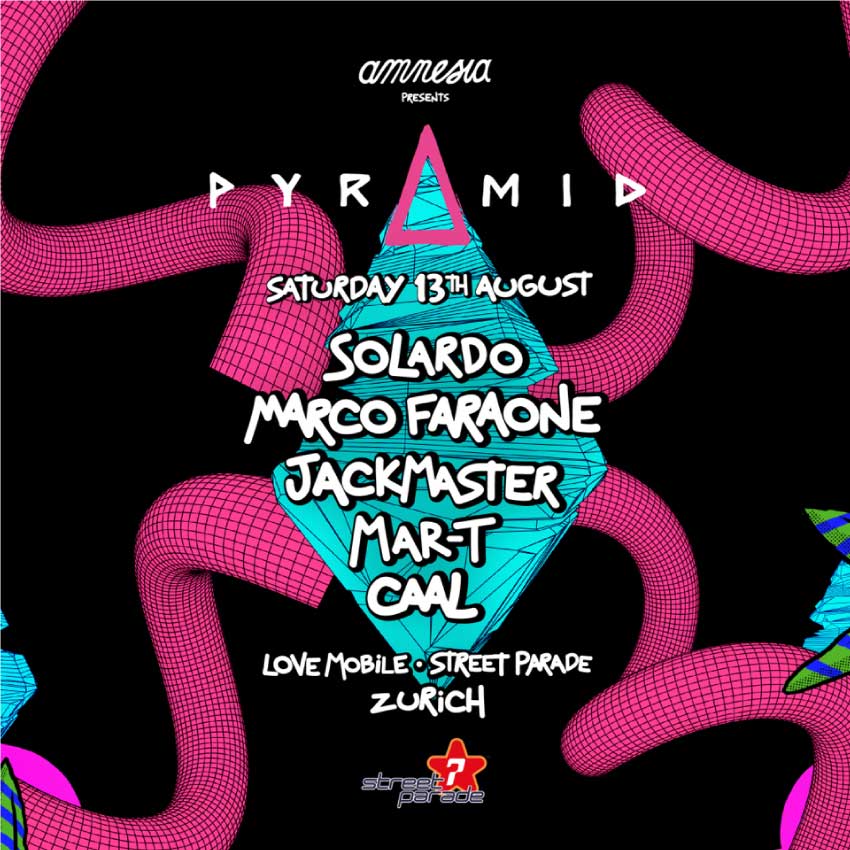