A constellation of starts make up the closing line-up

After announcing the date and the bombshell performance of The Chemical Brothers at the Amnesia Closing Festival, today we reveal the line up of the best and most spectacular party of the season. An event that will take place on October 15, 2022 from 18:00 and will last until the morning of the next day. Amnesia Ibiza will deploy its full potential with a science fiction production that will flood its two rooms in which some of the most important electronic artists of the scene will be protagonists.

In La Terraza The Chemical Brothers will give us an exclusive set from 21:00 to 00:00. The duo formed by Tom Rowlands and Ed Simons will offer one of powerful live performances consisting of flashbacks of techno, psychedelia and rock. Jamie Jones will offer an extended morning set, which means that the Welsh genius will be in charge of setting the soundtrack for the dawn and the first hours of the day. Cuartero will once again demonstrate his versatility and his mastery of the masses with a positive attitude and that stamp that only the greats possess. Eats Everything represents the roots of dance music culture; an open-minded selector who channels the essence of rave to cultivate an inclusive and unified feeling on the dance floor. Marco Faraone whose sound is impossible to pigeonhole and who moves like a fish in water in different styles, but always respecting the principles of coherence and musical quality. Mar-T b2b CAAL represent the essence of Amnesia, its DNA, its sound and the spirit that has shaped the sound philosophy of the club. Paul Woolfords vs Special Request will show us the two faces of the Leeds producer and his two different conceptions of the electronic sound. The DJ and producer of Brazilian electronic music Vintage Culture will propose his particular House style with Room and Deep nuances.

The Main Room will once again be filled with underground sounds and will feature some of the most avant-garde DJs of the scene. Nina Kraviz will unfold all her magic from the booth, offering us one of her wonderfully unpredictable sets. Her energy on stage, the way she moves, the way she faces the audience without any kind of regard, is highly hypnotic. Kobosil gets the musical aesthetics shaped by the cathartic energy of EBM, noise and pure industrial sound. Luca Donzelli returns to his favorite room to infect us with his neat style and that contagious energy that only he knows how to transmit.

When we say that the Amnesia Closing Festival is not just another closing party, we do not say it lightly, as it is a massive event like never seen before in Ibiza. If you want to be one of the lucky ones to attend this historic event do not delay too much because tickets are limited. And stay tuned, because there are still more artists to be announced!!!! 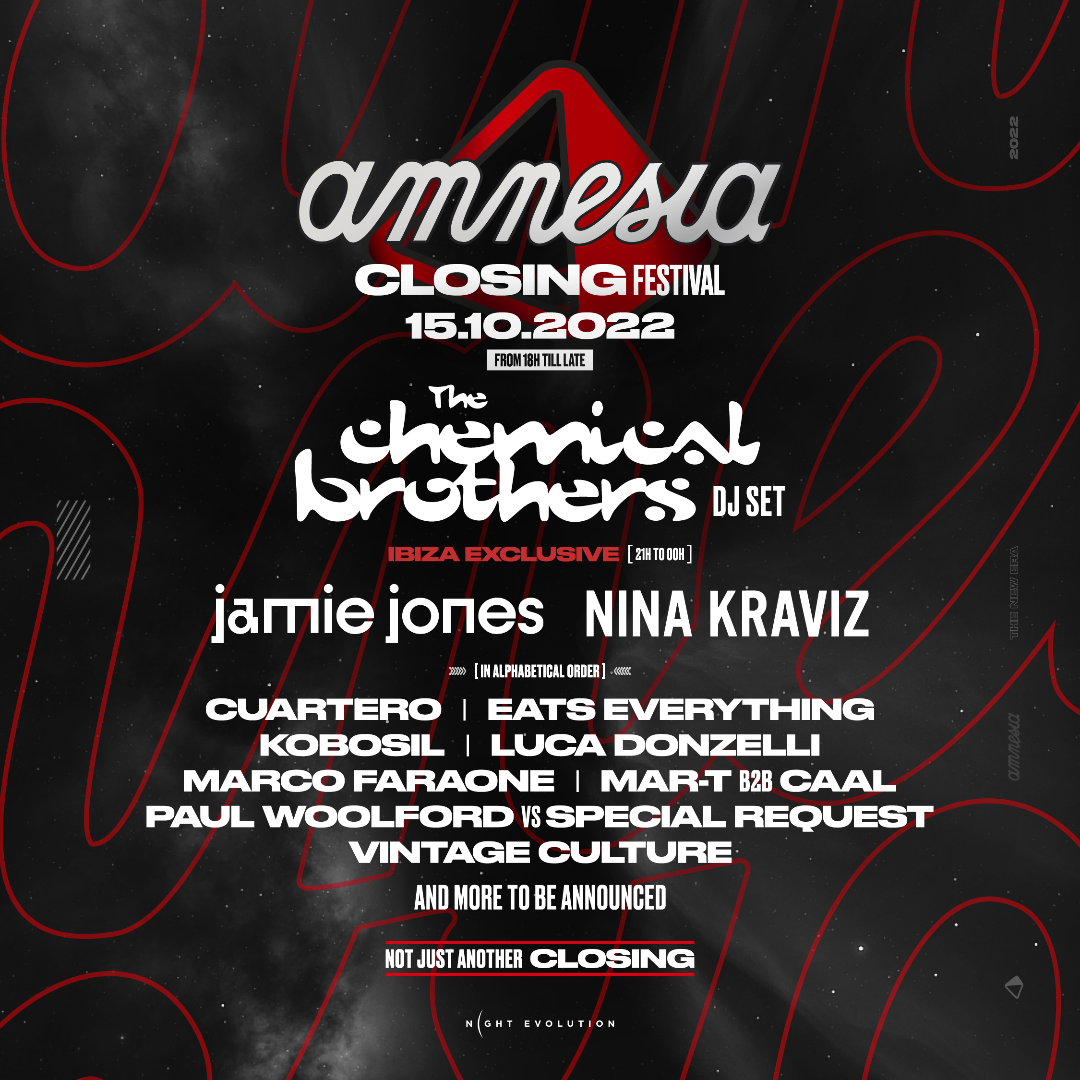